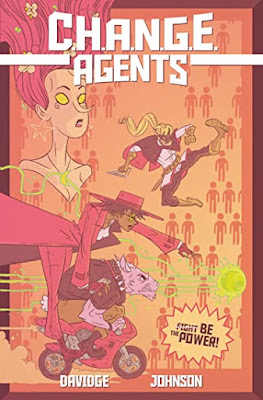 Renegade Arts Entertainment is pleased to announce the digital release of C.H.A.N.G.E. Agents # 1, now available exclusively on ComiXology and then other platforms after January. This creator owned comic has been written by James Davidge and illustrated by Nick Johnson.

C.H.A.N.G.E. Agents is about Meta Mary, Sid the Mighty Lamb, the Teach, Natura and the Unknown Worker - super-heroes dedicated to redefining our social contract for the greater good. Their stories take place in the timeless city of Groovetown - a place yearning for progress while seemingly stuck in a rut. C.H.A.N.G.E. stands for Citizens Hoping A New Governance Emerges.

C.H.A.N.G.E. Agents # 1 is the first of a two-part story entitled Spirits of our Social Contract. It introduces the team as they come together to solve the murder of Universa - a recently divined goddess who strove to bring disagreeing people together. The second part will be digitally released later this year and a print edition shortly after that.

James Davidge is the author of books and graphic novels including 1st Legion of Utopia, Mathemagick, My Modern Panic and the Driftwood Saga. A teacher for the Calgary Board of Education, James lives just outside of Calgary with his family.

Nick Johnson is an illustrator and filmmaker. His comic work includes The V-Card, 1st Legion of Utopia and Dia De Los Muertos. He was the art director for the feature length animated film Young George and the Dragon (2017).